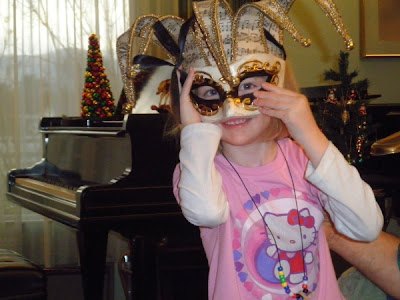 Miss Nora and I took the train up to our in-laws house in the Seattle area, then got to see two of my brothers and Mom up in Bellingham too.

We had a very nice 5-week break from school...well, I took two of it off from school. The past three weeks since Christmas, I've spent at least a few hours a day getting ready for next term of school.

I'll be done in the spring, and am looking forward to it!

There will be a day when I can blog more.

Miss Nora is talking like a regular 4-year-old now, asking lots of "why's" and showing me what she knows. She'll ask if she can help and proudly tell me when "I can do it by myself!"

She can do 48-piece puzzles by herself, recently wrote her own name by herself, and is learning to read!

Nora has a cousin who plays in the University of Oregon marching band, so we watched the Rose Bowl in Pasadena, and the parade that went before it, and saw her cousin. Nora was so taken with the whole thing, she made a "band hat" for herself and Bestema, and marched around the house with her kazoo and harmonica. She then asked if she could take her stuff to school, and we gathered all her musical instruments (she has many maracas and other little things to play) and she led a marching band at school.

That's about it from here! I haven't forgotten my blog, just haven't had a chance to do much with it, but we'll do it again soon.
Posted by Jules at 1/06/2012 10:59:00 AM
Email ThisBlogThis!Share to TwitterShare to FacebookShare to Pinterest