I got a bad haircut tonight. I told the gal what I wanted, and I got something, um, well, different.

People often make the mistake that somehow VOLUME in hair is good.

My hair is short. It's shorter now. But now, when I dry it and any volume is applied, I look like I did when I was 9 years old in 1976, when Dorothy Hamill won the Gold for Olympic skating, and we all wanted her hairdo. Mom gave us $5 to walk down to what amounted to a Supercuts and get our Hamill 'do and all was right in the world.

I think I'm having a flashback.
Posted by Jules at 2/13/2007 09:04:00 PM 4 comments:
Email ThisBlogThis!Share to TwitterShare to FacebookShare to Pinterest

Jules' Brain Does Not Shut Off

When someone doesn't blog for a long time I figure they have a lot going on or nothing.

In my case, it's a little of both.

Aside from not feeling well physically these past several days, which pretty much reduced me to laying around a lot, there is that little matter of the fact that "Jules' Brain Does Not Shut Off."

You see, I'm what my brother calls a "processor". Like my brother Jeff, we both turn things over, sideways and backways, analyzing it at each turn, showing it to others sometimes, and asking if they see what we see. Jeff and I have lovely conversations because of it. We recently had a conversation about immigration and its different effects and ultimately, how each country is different in how it approaches newcomers. While Jeff was telling me a bit about the differences between England's and France's approach from Jeff's more clinical, Sociologist's perspective, I realized how much I appreciate having my brother to talk about this stuff. Not everyone can look at a social problem with the aid of a Ph.D. in Sociology like I have in my brother.

The cool thing about Jeff and my talks is that we can both look at things, even quite differently, but when we're in "processing" mode, we help each other see things through to some sort of conclusion, even if we end up at a dead end and both pronounce it as "I don't know what the hell that's about." But I promise you, we still work on it to figure it out.

This same process hits me in particular when things aren't right in the world, and as many of you know, things have not been right in my world for a long time.

I hit an all time low in my life a week or so ago. There's nothing like taking stock of yourself at what you believe at least, is and hopefully will be your lowest point.

Last Wednesday was the 7th month mark since Jacob was born and lost. Add to that that my 40th birthday is looming like Colorado's latest snowstorm (read: relentlessly), and this whole year, I've concluded, is going to pretty much suck when it comes to anniversaries, milestones, and general feelings on the subject. I'd say about the worst depression I've ever felt has been in the past month, as the New Year dawned, and I realized that another milepost had come and gone since our tragic experience with Jacob.

But in the midst of all this pondering and licking my wounds, I also realized that it's "just going to be this way for a while", and that has its benefits. It takes the necessity of trying to make it all ok in my head away, and that's a tremendous burden lifted.

I've also made some progress in my general outlook this past week because of a friend, and one flat-out stranger said.

My friend Jenny called me this weekend. She called late, we talked for an hour, then she had to put her kid to bed. After she did that, she called me back. Two hours later, we had talked about so many things, and at the end of it, I felt normal, even GOOD. I felt happy to have such a great friend who listened, made some really good insights into what we've been through, and then we moved on to other things. The cool thing about Jenny is that we've only known each other a few years, but she's got me figured out like some of my 20+ year friends. She's not afraid to poke fun, and she is there when you need her. If you're reading this Jenny: Thank you.

Then Sunday night The Grammys were on, and Mary J. Blige won her first award, which was taken up with thanking something like 50 people...and upon her 2nd Grammy win, she said something that stuck with me: "You learn who you really are when you're at your lowest."

Tears sprouted from my eyes, and all I said was "Amen, Sister."

The fact is, I think if we're paying attention, we don't have to have tragedy teach us lessons. But it takes a lot to learn from even the bad shit in the world because it's really easy to let it turn into a Poor Me Fest. If nothing else, I've learned to be kinder, gentler, and more tolerant of others as we learn the worst and greatest lessons of life's fragility.

But sometimes it's also a matter of being kinder, gentler and more tolerant of ourselves.

I find the most important thing is to be patient with myself, and believe me, that's no small feat. There aren't too many people who would classify me as "patient", in fact I think most would argue I was flat out missing in that line when they were handing out Patience before I was born. I like to think that's part of my drive to be better, but it also becomes a bit of an albatross around my neck, as I often find myself expecting much more of myself than I could, should, or otherwise would.

I expect to be fine. I expect to come out of this. But I also know that's impossible on some level right now. As I contemplate what happened to us, and I start peeking into the future, I see where I want to be and know I'm nowhere near "there". The impatient Jules says "hurry up" and the logical Jules says "slow down, you've had a lot happen."

Then I imagine people in my life who don't know me well, will see my penchant for speaking in the third person and think "she's gone bananas". HA.

But seriously, I have to promise myself something in the waning days of my 30s, and that is to spend my 40s being more patient, and start by being that way with myself.

Even when my brain doesn't shut off.
Posted by Jules at 2/13/2007 07:33:00 PM 1 comment:
Email ThisBlogThis!Share to TwitterShare to FacebookShare to Pinterest 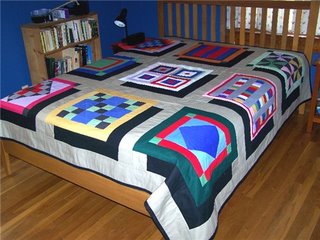 I'm finally done with the Amish Quilt I started some time ago.

Recently when I did a slideshow of quilts, I realized I hadn't made myself a quilt in at least 7 years! The double wedding ring quilt in the first clip was the last thing I made for Brian and me, and that was back in 1999 or 2000. I remember it because it was after we got married and had moved to Yakima that I finished that quilt.

Around Christmast time when all the snow started, we were planning on having family here for the holidays, and with the subzero temperatures, I realized that we could use another blanket anyway, and so I googled "Amish Quilt" and stumbled across this pattern, and I just fell in love with it!

It has a 3D effect that I really liked. It was neat to make something that wasn't a repeat of the same pattern over and over again, so I could do one block, then finish that and do something different. Actually it was fairly simple -- the real challenge was not having any instructions except the picture, so it was a challenge to just figure out how much of what I needed to do it. 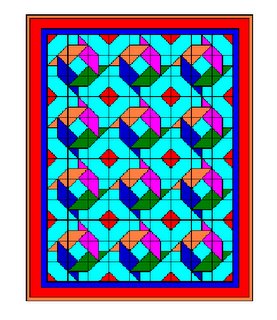 Now, it's on to my next project -- this one's for my niece Miriam. She's got a crazy Austin Powers-like paint job in her bedroom, and we've found a pattern and color scheme that will go with the room!
Posted by Jules at 2/03/2007 02:06:00 PM 4 comments:
Email ThisBlogThis!Share to TwitterShare to FacebookShare to Pinterest
Newer Posts Older Posts Home