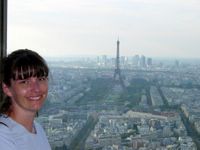 I'm too tired to sleep. But I nap. When I awaken, I feel like I am "coming to". But mostly I'm awake.

I just got back from Paris, France. So neat to see the city and spend some good time there. We had a week, and saw so much.

It's hard to finish anything today. I did some laundry but haven't put it away, started cleaning the bathroom, so the sink and toilet are clean, but not the tub or floor, and I did vacuum, but the vacuum cleaner is still sitting out, plugged into the wall.

I'm even having trouble finishing this post, but I'm going to do it, dammit, just so I can say I finished SOMETHING today. But this is all I have to offer today. Tomorrow, I'll write about how my darling husband forgot his greencard and wasn't allowed to leave France until he went to the US Consulate office to get permission to land in the States. But that's a story that needs to be told in its entirety, and I just don't have it in me until I get a nice 8-hour Ambien night's sleep.

Ah, jetlag.
Posted by Jules at 9/26/2005 05:38:00 PM 2 comments:
Email ThisBlogThis!Share to TwitterShare to FacebookShare to Pinterest

This is why I live in Denver.

I got on the bus Monday and these two guys get on the bus after me somewhere down near 38th & Pecos. One is older and the other guy is younger, but speaks so unintelligibly I thought he was drunk or impaired. My inner voice says "Man, drunk at 8:30 a.m.???"

They got on the bus, and were talking to a woman next to them about how they just got here after being at the Superdome and then bussed to San Antonio. They're staying with one of the guy's brothers here in Denver.

They were headed to Social Security so the older guy could get registered. I was reading a book and sitting back a ways so I couldn't talk to them without yelling, but I could hear quite a bit. Anyway, this lady starts telling them about how they need to get to the American Red Cross, and it's down on Speer Blvd., and they don't know where that is.

She said she was getting off at Champa where the Social Security office is, so she'd walk them there to make sure they were taken care of.

They thanked her up and down, and then I heard her say "Well, my appointment isn't til later. I'll make sure you get down to the Red Cross too."

I was just sitting there amazed and delighted...THAT is the difference between Denver and Seattle. Seattleites would tell you where to go and wish you well, but they'd never drop what they were doing and just say "Hey, I'll take you there and make sure you're ok."

I watched them get off the bus and the lady had a daughter with her...they were quite a motley crew, as the guy with the thick New Orleans accent had pants on that were obviously donated...they fit up top, but were many inches too short.

I love taking the bus. You meet and see the most amazing people. I reached for the $10 I had in my wallet before they got off the bus, but they moved too fast. I would have gladly given it to them just so they could get a bite to eat or something.

I've made more friends casually here in Denver in 4 years than I did in all my 15 years in Seattle. Good friends too. Ah, Denver hospitality. Thank you, my adopted city. You are wonderful in more ways than one, but this is a big one.
Posted by Jules at 9/14/2005 09:54:00 PM No comments:
Email ThisBlogThis!Share to TwitterShare to FacebookShare to Pinterest

In the past year I've had the honor of going to New York City and standing at the eerie spot that once held the towering World Trade Center.

Despite the fact that it's now a construction zone, there's no doubt that you sense a lot of death happened there. It makes me believe that the disturbance in the cosmos that occurs when great tragedies happen are real and not to be forgotten.

I do believe that those who died in the Towers and on Flight 93 were innocent in the technical sense, but I also understand that because of our wealth we are a target, and any participant in the creation and maintenance of that wealth is perceived as an enemy. My question is, by whom? Is it just Islamic extremists? I don't think so.

That 9/11 morning in 2001, I woke at 6:50 a.m., just as news came out that a plane had hit the World Trade Center. I said something to my husband about it, and we both thought it was just a small plane, and surely it was an accident.

In the 10 minutes it took me to start coffee and turn on CNN, I watched as the second plane hit. "Holy Shit," I thought. "This is no accident. I called a friend on the West Coast who's a newspaper reporter, who I knew wouldn't be awake, much less at work yet. I told him to get to the newsroom because the Towers had been hit, and we were apparently under some sort of attack.

As I drove to work I listened to the radio as the DJ's said for people not to panic. "Panic?" I thought, "All I want to know is "who's ass are we going to kick for this?"

Four years later, we've managed to attack two countries (let's not forget Afghanistan), we've alienated many of our allies in Western Europe, and despite all our 21st Century Technology, we can't find Osama bin Laden in his mud hut somewhere.

There's no easy answer. There may not be one at all. But I can tell you this: I don't believe what we're doing is destroying more terrorists than it's creating.

And I consider myself a patriot for standing up and saying so.
Posted by Jules at 9/11/2005 04:56:00 PM No comments:
Email ThisBlogThis!Share to TwitterShare to FacebookShare to Pinterest

My Twice in a Lifetime Trip...

The last time my husband and I went to Europe in 2003, we took 23 days to go from London to Paris, on to Venice, Florence, Rome, and Athens. We kept going to Samos Island, to Izmir, Turkey, and finally Istanbul.

At the time I remember a lot of people being surprised at how far we were going, how many cities we were seeing, and kept referring to our adventure as a "once in a lifetime trip."

Next Thursday, we're on another adventure, this time to London for a few days, then a week in Paris.

I don't believe in once-in-a-lifetime travel. I may never go back to some of the places I've seen, but I'd like to think I will. Given the fact that we probably won't have kids, and my willingness to live with furniture and carpet I'd rather replace, we have the means to do it.

I do believe it's all about priorities. My husband and I bought an older house that needed fixing, and we've done most of what needed to be done. After that, we decided that instead of a Pottery Barn interior decorating job, we'd rather travel.

For those of our friends with kids -- I am always amazed at the sarcasm with which I hear "must be nice" when I say I'm going somewhere overseas. I don't say that to them when I hear they're pregnant with child #3. Although don't think for a minute that it doesn't pass through my head. At least the filter in my brain works.

As much as we'd like a family, we apparently can't have one. We decided instead of sitting around moping around about what we don't have, and instead concentrate on what we do have, and in our case it's freedom and a little extra play money.

So off we go to see some more of the world. We chose London because the last time we were there we only had a couple of days, and it was WAY cooler than I expected, and there was much more to see than the usual stuff. Heck, even the usual stuff is in plenty of supply. We also chose Paris because the last time we went we spent 3 nights and 4 days there, most of which was taken up with me getting bronchitis and feeling too ill to do more than walk directly to the Mona Lisa at the Louvre and back out again, taking a double decker bus tour to drive past a lot of major sites, and a trip up the Eiffel Tower. Paris deserves more than that. It deserves a minimum of a week sitting in cafe's, sipping cafe au laits (pronounced "caffay o'lay") and climbing the hills of Montmartre.

So many people think they can't afford it, but spend $200/night at a hotel in Aspen. For $800 you can fly to Europe, and if you're judicious about it, you can find a very nice hotel in the heart of Paris for less than $100 a night! Wine is cheaper than soda, a museum pass gets you into all sites (and their bathrooms!) for less than $50 for the whole week. Yes, it's money out the door, but it's less expensive than that car payment.

That last trip was like a sampler...I got to see plenty, but now I want to go back to old cities and new ones and really soak it in. For the REST of my life.

Jules
Posted by Jules at 9/11/2005 03:31:00 PM No comments:
Email ThisBlogThis!Share to TwitterShare to FacebookShare to Pinterest

I won't go into much detail about why this title strikes me as funny...perhaps because it's been an theme in my life more than once.

I've never been one to stand by and let someone I know and admire get hurt, and recently such an event happened. It didn't matter that I'd never met her in person, because the fact remains, I know the details of her life better than I know some of my own best friends in real life.

But nothing -- nothing -- pisses me off more than watching a friend get hurt over the gossip of another. The fact that the perpetrator of this crime actually puts herself in a position of true insincerity and duplicitousness and calls it "wit" and "harmless" makes it even more appalling, especially when considering the vulnerability of the victim.

I'm in the middle of reading Charles Dickens' classic A Tale of Two Cities, and in it he talks about a Monsier who willingly lets his nephew face a trial with the possible outcome being "drawing and quartering" (an all too recent method of execution), and who himself believes he has a right to the privilige of class and distinction, purely because he was born to it. Little does he know that the French Revolution is about to occur, and the lovely chateau he calls home is on the verge of being sacked and burned to the ground as the angry "little people" get their vengeance.

People are only leaders if you let them be. It's really a matter of silence and complicity that allows most people to hold any power at all.

When you step up -- speak your mind -- and not allow the tyrants of the world remain tyrants, it does amaze me that they often are surprised to learn that they are viewed in such a light.

But the quacking and noise I heard from this woman was as simple as the sheep who followed her.

I simply pronounce her a duck.