Boy, My Lutheran Pastor Would Laugh At This


Posted by Jules at 3/26/2006 11:18:00 AM No comments:
Email ThisBlogThis!Share to TwitterShare to FacebookShare to Pinterest

Posted by Jules at 3/26/2006 11:00:00 AM No comments:
Email ThisBlogThis!Share to TwitterShare to FacebookShare to Pinterest 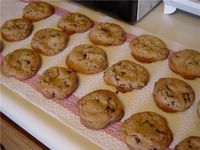 I don't mean to brag, but I've been told that I make a really wicked chocolate chip cookie.

I learned how to make a good cookie through the back of a Tollhouse Cookie bag, through working for a lovely woman at a cookie shop in Seattle, and through trial, error, and a little good luck over the years.

Several years ago, I started making cookies with my KitchenAid blender. I think that's what set off the complements I was getting on my cookies, and since then, I've been asked how I do it. As I started listing what I do different than what my mother did, I didn't realize it was such a long list. But I'm willing to share it, and I hope your cookies turn out right too.

So here it is:

Use the Tollhouse Cookie recipe on the back of Nestle's chocolate chip bag, without exception -- except instead of using one bag of chocolate chips, use at least a bag and a half.

Instead of baking at 350 for 9 minutes, bake at 325 for 12-15 minutes, depending on whether or not your cookie dough is chilled at all. Most ovens run hot, so turning it down to even 300 is not going to hurt the cookie, only take a little longer to cook, and that's good (it reduces the chance of burning).

Use insulated baking pans. They keep cookies from burning, and give you a nice crisp bottom while allowing the inside to stay soft and chewy.

Use a KitchenAid or other blender to make sure your wet ingredients are nicely mixed to a very smooth consistency.

Use an ice cream scoop to scoop your cookie dough. Spooning it doesn't pack the dough and chips together, and I think this makes a more uniform cookie as well.

Never overbake, when you see the edges getting the least bit brown, pull them out of the oven.

Finally, store your cookies in a Tupperware container, but don't seal it completely. In a dry climate, like here in Denver, I almost seal it just to keep the cookies from drying out. In Seattle, where there's a lot more moisture in the air, you have to seal things to keep them from going stale and taking on too much moisture out of the air.

A special thanks to Kay's Cookies in Seattle, where I worked while in college. She's the one who told me about baking longer at a lower temperature. I liked her the day she told me she thought Mrs. Fields was "a tart who didn't know a thing about fresh-baked cookies."

Enjoy!
Posted by Jules at 3/25/2006 01:52:00 PM 2 comments:
Email ThisBlogThis!Share to TwitterShare to FacebookShare to Pinterest

Today is your birthday! Happy Birthday To Ya! -- The Beatles.

I have this song set to wake me up tomorrow, my 39th birthday.

Judging by the way I handled 29 and loved turning 30, I'm sure that this 39th birthday is going to be the same.

Let's recap the past decade:

Jules
Posted by Jules at 3/21/2006 09:55:00 PM 2 comments:
Email ThisBlogThis!Share to TwitterShare to FacebookShare to Pinterest

Peering Into The Future

Brian and I went to Best Buy today and bought a couple of new toys for our iPods. One is a birthday present for me -- the iHome, a dock for my iPod that charges it, has an alarm clock, with a radio, and a bunch of other cool features.

The other is a dock to hook up the iPods to the TV and stereo. We haven't been able to watch my video downloads on TV since we didn't have the dock, so we finally got one.

With this, we're removing most of our stereo equipment, so all we need now is our tuner, equalizer and iPod dock to play ALL the music we own. PLUS, I got online and replaced what's left of our few VHS videos that we don't have in DVD, so we can get rid of the VHS player too.

I realized as I was hooking up my iPod to my new alarm clock dock that someday this too, will be obsolete, and maybe my kids or nephews & nieces will look at it and laugh at how "high tech" it was considered "way back in 2006".

In the meantime, it does amaze me how much smaller and smaller technology is getting. I saw a friend's phone the other day and it's as slim as a stack of about 5 credit cards.

Where are we going with all this? Someday, an iPod, phone, video cam, internet connection, all on a credit-card sized electronic masterpiece? I know we're nearly there already, but wowie.

Nothing makes me feel old like realizing that we used to have only 3 channels for TV, every phone was a land line, and the amount of space it would have taken to store all my music would have been several boxes of LPs instead of my one little iPod.

Progress. I do love it.
Posted by Jules at 3/19/2006 05:43:00 PM No comments:
Email ThisBlogThis!Share to TwitterShare to FacebookShare to Pinterest

I'm sitting here in my big red terry fluffy bathrobe, but not without getting shocked first.

Let me tell you one thing that sucks about the Mile High City.

No, not the kind you get from authority or from your significant other. It's electricity I'm talking about.

When you pull your sweater over your head, you get static.

In Denver, if it's dry enough like it is today and has been for the 5 years I've lived here, you should try to do it in the dark.

That's when you actually see the LIGHT that emits from the static electricity.

My husband has started to touch some part of me -- my cheek or my hand -- before he kisses me, so we don't throw sparks when our lips touch.

My cat Jack doesn't look at me the same way because when I reach out to pet him, he's not sure if he's going to get some lovin' or the shock of his little feline life.

Somebody, ground me.
Posted by Jules at 3/04/2006 11:30:00 PM 2 comments:
Email ThisBlogThis!Share to TwitterShare to FacebookShare to Pinterest

I was at the furniture store today and looking at some really outrageously huge furniture for bedrooms. We have an older house, so the palacial-style bedroom groups would have to be split up to fit into any of our 3 bedrooms.

I looked at one massive set today and wondered if people actually buy something that big. Is it kind of like how we women (well, some of us anyway) think when we see a man driving a really overly huge truck?

We think: "What is he trying to over-compensate for?"

Why is bigger so much better? Why does substance suffer for style so much of the time?

My husband makes me think of stuff without even trying. Like when I want to buy some new furniture. Yes, it's a "want", not necessarily a "need", since I do own a house full of furniture. But some of it is just plain tired.

Brian is the kind of man I think of as being like pretty much most men -- good, for the most part, but also unwilling to replace anything in his house unless it's disintegrated before his very eyes.

So, when I decide that maybe that "Trading Spaces" job I pulled on the couch a few years ago is tired and perhaps the whole thing should be replaced, I actually think about it for some time before asking Brian about whether we should.

He's one of those still waters run deep types that make you think things through. Sometimes that just bugs the living crap out of me.

I am, after all, me. While I like to think things through like whether God is here or there, about what the sound of one hand clapping is, or other existential stuff like that, I am a bit impulsive when I decide I want something tangible.

But Brian makes me think about it first, and actually that's a good thing. Left to my own devices, I'd probably have monstrous credit card debt and a really nicely appointed home.

OK, I'm not that irresponsible.

So, with my own arrival and some help from my dear husband who Makes Me Think, I have realized that life is about a heck of a lot of choices. Once the "needs" are taken care of, it does come down to choosing the "wants". We have decided to make travel a higher priority than new furniture over the past few years, and I wouldn't trade my memories and pictures of Europe for anything.

In the midst of all this thinking about what should I do, I realize I am lucky to even have these choices at all. There are some people who don't even consider it, or just don't have the means. I also wonder sometimes if people are conciously making those choices or do they often just do things because "that's what's next"?

I've fallen into that trap myself, but there was a point at which I realized I was never going to be a regular person who did things by the book...anyone who meets me sees an Apple Pie shell, with a real wicked sense of humor...and a full-fledge geek under that.

I'm ok with it all...after talking to my sister tonight, I realized that as I face turning 39 this year (ok, it's not 40, but I'm more of a -9 Panicker than actually the big -0 Panicker) that I've realized that I don't really mind being older, and that I cherish more of the wisdom I've gotten since the last time I panicked at 29.

Of course, talking to her was better than talking to a therapist. She's several years older than me and can truly assure me with her world of experience, that it's all going to be ok.

It is going to be ok, and I WANT to be able to say that sitting on a new sofa someday.
Posted by Jules at 3/04/2006 09:24:00 PM 1 comment:
Email ThisBlogThis!Share to TwitterShare to FacebookShare to Pinterest
Newer Posts Older Posts Home