They're Not The "Big Breasts" in French 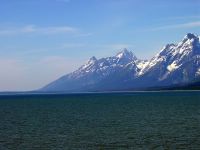 Even my Dad said to me one time as we drove through the Grand Tetons the last summer he was alive, that he thought "The Grand Tetons" meant "The Big Breasts" in French.

I'm not sure where that came from...and maybe it's true, but after going through my big French dictionary, I couldn't find anything to support that American myth.

On Wednesday morning this past week, I drove from Mammoth Hot Springs in North Yellowstone, stopping at the Fountain Paint Pots and Old Faithful, before heading south through The Grand Teton National Park before coming home to Denver. This picture was taken at about 9 a.m., and despite my antsiness to get home, and the fact that I had just passed the slowest, worst driver ever, I was willing to pull over for a moment at the edge of the lake to snap this photo.

I'm finding as I age, and live in the Mile High City longer and longer, that I am fascinated by mountains. Their majesty of soaring to great heights in short distances, their foreboding presence when you contemplate what it would take to climb them, all make me love to look at them and wonder at the great creation that is Earth.

I've driven and traveled the United States fairly often in my 38 years. I've been to Miami Beach, New York City, Southern California and Seattle, Washington, so I've seen the four corners essentially, of our continental USA.

But in the heart of it, right up the middle, are Rocky Mountains, with alpine lakes, rivers and streams and majestic mountains that put me in awe. The Grand Tetons is one of those places as well. To quote Yakov Shmirnoff, the Russian comedian "What a beautiful country."
Posted by Jules at 6/25/2005 08:42:00 AM 2 comments:
Email ThisBlogThis!Share to TwitterShare to FacebookShare to Pinterest 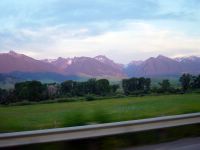 This past week, I took a roadtrip back to my stomping grounds in the Northwest. Mostly to pick up some of my grandmother's things that she left me, and to help my brothers and sister go through the last of her storage items. On the way back, I drove through Yellowstone National Park.

This photo was taken as I approached the North Entrance to the park...the sunset was stunning and I couldn't help but snap this and many other photos along the way.

There is something great about taking a road trip, but I particularly enjoyed this one. As I drove on this 3,000 mile journey alone, I had a great time just cruising along, seeing a lot of my favorite places in the West and Northwest, especially the incredibly precious Yellowstone.

A road trip lets you think, but when you're alone -- you often find yourself wanting to press on -- especially when you've been on the road for 15 hours, and are about to collapse. As I drove along, I found a new hobby -- one I've named "Dashboard Photography". No worries about taking good pictures...some of them will turn out ok, others will focus on the bugs on the windshield, only to be deleted later.

But this precious photo is one I will remember and enjoy -- because it's entering into what I consider to be one of the most special places in the U.S. One of geysers, bison, paintpots, and elk. One of mountains, rivers and a part of us that seems lost and forgotten, but here it remains.

More later.
Posted by Jules at 6/22/2005 11:19:00 PM No comments:
Email ThisBlogThis!Share to TwitterShare to FacebookShare to Pinterest

E is for Effort

Last night my husband and I were joking around...like we do sometimes. OK, a lot.
He said "I love you," and I responded "But I'm SO high maintenance!"

He laughed and said no, you're not. In fact, he said, I don't have any of the problems some of my friends complain about with their wives.

Which of course, begged the question "What kinds of problems?"

Sometimes he said, he hears from his friends that their marriages have problems because someone just stops trying.

"I think it's easier because we're friends too," he said.

I have more than one female friend who feels their husband has stopped trying too. I've seen it with my own two eyes. In some cases, it's so bad that you just want to sit the guy down and SAY something, but of course it's not my business to do so.

The one thing I don't get is how people can stop trying in a relationship, and yet just stay in it, miserable. And often, the person who stops trying first blames the other for not being there.

But it is ALWAYS time to break the impasse. Saying "let's fix this" are probably the greatest words besides "I love you" that you can say to your spouse. But so few people do. Some people will step up to the plate and change, others will throw in the towel.

I've been married before. I've said "Let's fix this" only to find out he didn't want to fix anything. Towel thrower.

But I've also been married to a man for the past five years who takes the smaller problems in life and says "How do we fix this together?" He's my Brian.

There are times when things get tough for us, but we're in it together, and that makes it amazingly easy to get through. Ultimately, the only person in the world I want to go through life with is my Brian, and he feels the same way about me.

A little Effort, that's all I'm saying. Try it today.
Posted by Jules at 6/11/2005 08:38:00 AM 3 comments:
Email ThisBlogThis!Share to TwitterShare to FacebookShare to Pinterest

I recently finished a quilt -- and decided who it's going to (that's a secret to those in my family who might read this as it's going to be a surprise). I have it boxed up for a trip, and recently took it out to show someone who had come over to visit.

Well, after showing the friend I didn't wrap it back up and put it in the sealed box, and recently I walked into the back room to see this photo op -- my cat had found a way UNDER the paper and ONTO the blanket.

I find my cats like to lay on things -- sure, we all like comfortable spots, but they also like to be covered up with a view from their fortress. It reminds me of when I was a kid and we'd hide under the kitchen table after throwing a sheet over the top to make a "fort" or play "house".

There's something about finding your comfortable place. For me, I like my front porch during a lightning storm. Enclosed with windows, I feel safe from the storm while being able to watch the light show and hear the big thunder roll across the skies.

I'm getting ready to go on a long road trip alone -- to Oregon. I'm going out to get some of my Grandma's things from her estate, including her dining room set and my Grandpa's old secretary desk.

I find the prospect of a road trip exciting, especially because I find the road to be a good place to process things...but it's also a feeling of being "out there" on my own -- out of my comfort zone that is at some level exciting, but also a little scary.

While most of my brothers and sisters don't really care about having any of her stuff around them, I find the prospect of having some of Gram's things in my home comforting. Partly, because Gram's house was always a place of stability -- she never moved in my whole life while my family moved around a lot. I remember many summers eating at that table, and playing "office" at Grandpa's desk, making prank phone calls with the phone that sat on it, and playing "school" where I was the teacher to my little brother.

To have those things in my house will feel like a few things that belonged to her went on to be in another home to build new memories and celebrate old ones.

Someday I hope I'll have kids who can do the same thing I did, hopefully minus the prank phone calls.

"Is your refrigerator running? Better go and catch it!"
Posted by Jules at 6/10/2005 07:19:00 AM 1 comment:
Email ThisBlogThis!Share to TwitterShare to FacebookShare to Pinterest
Newer Posts Older Posts Home