Miss Nora's child-sized rocking chair we bought so many years in Denver finally broke down enough that we couldn't use it anymore...

That little chair I bought when I was pregnant the very first time way back in 2002, ended up sitting in our basement in Denver for five years before we moved here, and Nora finally could use it...

But the other day, that chair, which was old, falling apart, and had been fixed by several people without much in the way of woodworking skills, pinched Nora's fingers, and frankly, she'd outgrown it anyway.

I got online at Amazon and found this chair on sale at Amazon, and there were several design choices and Nora chose this one...We ordered it Tuesday and I told her it would take a couple of days. I didn't mention it again.

The thing that really amazed me was when I picked her up at school today, I said she got something in the mail today, and she said "MY CHAIR!"

It's amazing to me how she can recall things from days earlier, with no real prompting. It just shows me how she's growing up!
Posted by Jules at 3/31/2011 10:09:00 PM No comments:
Email ThisBlogThis!Share to TwitterShare to FacebookShare to Pinterest 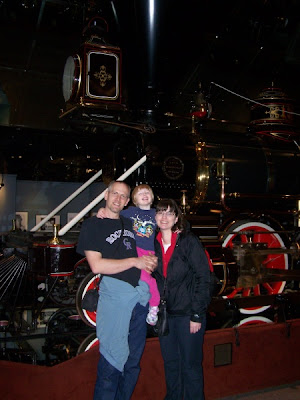 Boy howdy, this Spring Break turned out differently than we originally planned, but well worth the road trip!
Nora and I went south to California, originally with a trip planned to get spoiled rotten at my Aunt Kathy's for a few days, then going to San Francisco by ourselves (over my birthday), and then home... 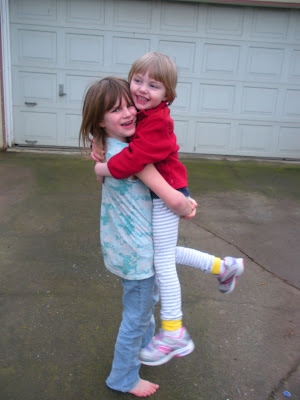 But upon arrival (literally within a few minutes), my uncle, who had been sick for a while, got an initial diagnosis of something relatively contagious, and we decided that Nora especially would be best not seeing him, so we ended up checking into a hotel in Sacramento. 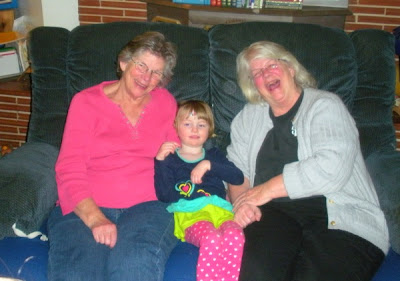 A few days of seeing the sights, and spending LOTS of time at my cousin Mark's house (his wife Cindy is just frankly, one of my FAVORITE people after this trip), Nora got LOTS of face time with Cindy & Mark's youngest kids...

...and we got an epic storm in Sacramento that all but blew the doors open on the hotel we were staying in! 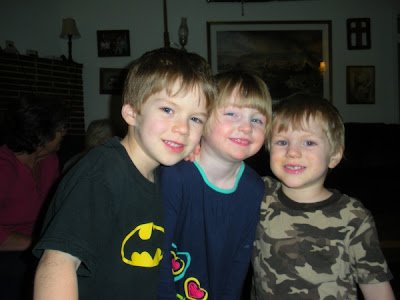 When Brian arrived, we had one last afternoon touring the Sacramento museum of trains (It's the Colorado State Railroad Museum, WELL worth a few hours of your time if you're in the area).

Then it was off to San Francisco with us for the rest of our time off. 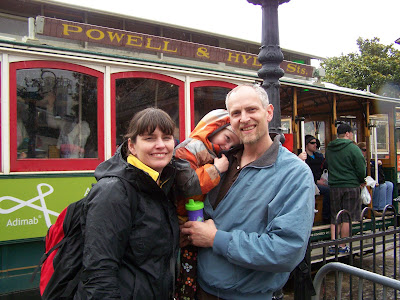 The floods were AMAZING, and when Brian flew in on Sunday after we'd been there a few days, he said the whole Sacramento Valley was flooded!

My mom-in-law had arranged for Nora and me to stay at a hotel in downtown San Fran, so we all got to stay literally a half block from the gate to San Fran's Chinatown at Bush & Grant streets! 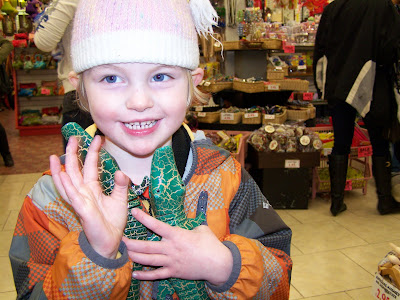 Monday we drove in and got a lucky day at the zoo (more pictures may follow, but suffice to say, it was our "sunniest" day in SFO considering the spring climate) and Tuesday was my birthday, and we got to spend an entire day in the city, starting at Coit Tower. 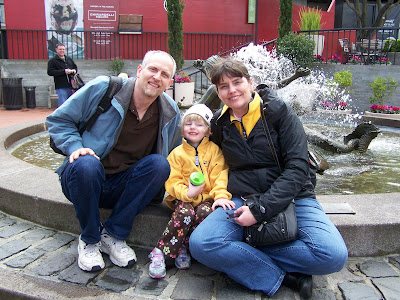 We parked our car and took buses and street cars for all of our visit, and ended up touring an apartment on Telegraph Hill.

We walked around an apartment with an open house near Garfield Street, which let us in on a little factoid: For only $359,000, a 700 square foot apartment could be ours in a VERY desirable neighborhood! LOL 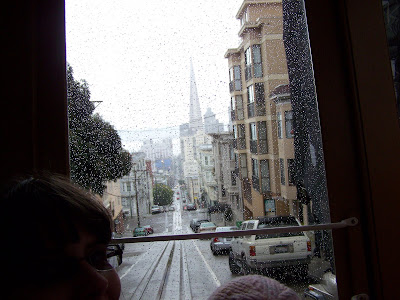 >...After that little reality check, we stopped at a Lombard Street deli for sandwiches and goodies, and walked the rest of the way to the Pier where we could see the sea lions and enjoy our lunch. We then went to Ghirardelli Square, and bought a little chocolate, and then took the street car "home". 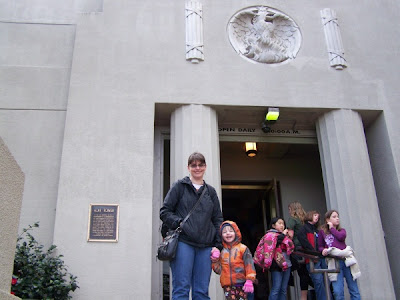 We weren't done with our day yet though, as we walked through Chinatown and shopped enough to buy Miss Nora a Chinese umbrella, and find her a place to play at a local park. 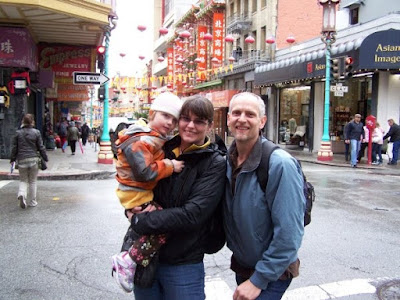 aThen we went to a Pizza place (Uncle Vito's) near the hotel, where a TWIN set of women in their 80s came to eat in the window seat near us. They said they were from Kalamazoo, Michigan, which is where MY MOM is from. MOM remembered them! She said they used to walk in step together! When I showed her the picture, she recognized them!! 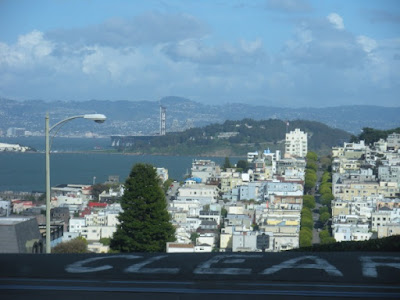 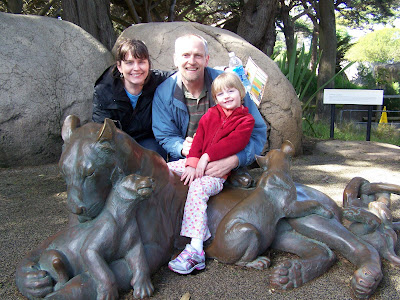 Our last day we checked out of the hotel and headed north. We meanedered across the Golden Gate Bridge, then had lunch in a wine town North of SFO, and headed towards the northern California Coast.

We stayed in a rather obscure little cabin not far from Arcata, CA. It was one of those strange little off-the-road combination cabin/gas station/mini-mart places with (in this case) great service and friendly staff. 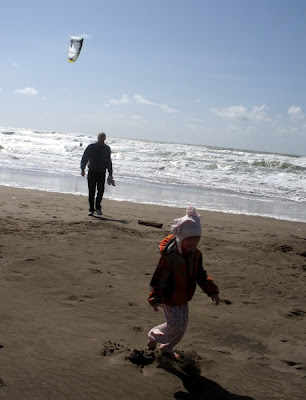 And finally, last Thursday evening, we drove the rest of the way home.

I'll tell you, the difference between this year and last is Nora's travel aptitude -- I did SFO by myself with her last year and she was only 2.5 years old...this year, she REMEMBERED the playground in Chinatown and was VERY active in deciding where we went, and very excited about our plans.

She traveled very well!
Posted by Jules at 3/30/2011 10:01:00 PM No comments:
Email ThisBlogThis!Share to TwitterShare to FacebookShare to Pinterest

The ONLY Picture of the Day... 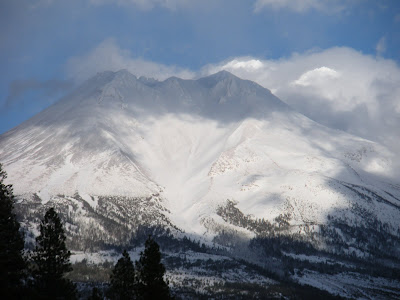 While Brian holds down the fort, Nora and I are on our way south to California to see Aunt Kathy and Uncle Richard, and pick up our Bestema and bring her home!

Well, today we drove through Oregon and made it to our favorite stopping point along our way, in Weed, CA.

This view of Mount Shasta is what greeted us in the parking lot as we crossed it to go to get some dinner...SO rarely is this mountain "out" due to cloud cover, it really was a feast for the eyes!

I'm going to try and blog a little bit more during my spring break...hopefully time will allow it!

I can't wait to see Aunt Kathy & Uncle Rich, the tribe, and spend a few days in San Francisco for my birthday!
Posted by Jules at 3/16/2011 10:35:00 PM No comments:
Email ThisBlogThis!Share to TwitterShare to FacebookShare to Pinterest 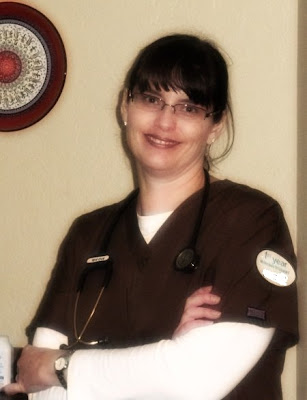 We're not really allowed to write about our experiences, because well -- you could risk someone figuring out what patient you're talking about, or whatever other breach of confidentiality could occur...

But suffice to say I made it through the second term. I got my first B in a really really long time, and it felt goood. Why? Because I kissed my ALL A's goodbye, and embraced the fact that getting a B was fine. It was getting through, I have the knowledge I need, and perfection isn't everything.

The best meeting was with my advisor today.

She doesn't give out high grades, and I got two of them. She said "You did this. this and this...You're ready for the next level."

I am proudest of being able to handle two patients, to be able to give them meds on my own, and assess their needs and meet them.

And at the end, I made it through.

We lost a lot of really great people from our program this term, because the testing is brutal and for a variety of reasons, they didn't make it through.

For that I am sorry.

But I love school. I'm doing well, and I know this is what I'm meant to do.

Not everyone gets that.

On to Spring Break and a new term!
Posted by Jules at 3/15/2011 11:19:00 PM No comments:
Email ThisBlogThis!Share to TwitterShare to FacebookShare to Pinterest
Newer Posts Older Posts Home