The weather was nice enough today that I went out to do some yardwork after I was done with my homework. When Brian and Nora came back from the Kids Club, they came in the backyard and Nora and I went through looking at all the flowers including the newly bloomed crocuses and daffodils.

Nothing quite melts a Mommy's heart like having my little one show me a daffodil and "gasp" as if it's just the coolest thing ever.

(Click on the picture for a bigger view)
Posted by Jules at 2/28/2010 06:30:00 PM No comments:
Email ThisBlogThis!Share to TwitterShare to FacebookShare to Pinterest

Cute Picture of The Day 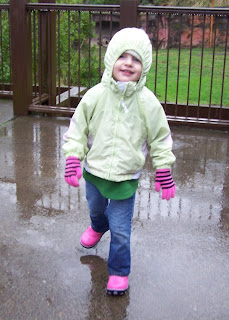 Brian dropped me at a downtown Portland Starbucks yesterday and took Miss Nora to the zoo this weekend. She thinks the place is her personal park, and we enjoy it more when the weather's crappy just because it keeps the crowds in check.

I met up with them after I was done studying, and found Nora wearing boots for the very first time! She LOVES the fact that they keep her feet dry...being a puddle jumper AND a clean freak who (like most of us) doesn't like wet soppy feet, that's a great thing!
Posted by Jules at 2/27/2010 06:15:00 PM No comments:
Email ThisBlogThis!Share to TwitterShare to FacebookShare to Pinterest

Our Daughter The Flugel Horn

I was watching a video with Nora about letters, and the H had "horn" and a horn would blow. I told Nora "You're from a trumpet and a trombone" (I played trumpet in band, Brian played trombone), and from across the room comes Daddy's quote of the day "That makes you a flugel horn."

Well, at least she'll be able to march at band camp.
Posted by Jules at 2/26/2010 09:53:00 PM No comments:
Email ThisBlogThis!Share to TwitterShare to FacebookShare to Pinterest 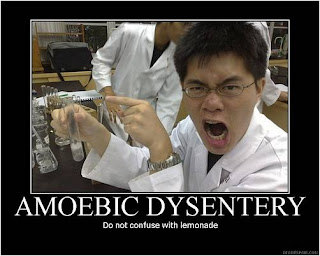 I'm taking Microbiology this quarter from a GREAT teacher I enjoy very much -- especially compared to the rather painful last quarter of Anatomy & Physiology.

I turned in my nursing school application last week, and will hopefully hear that I made the first cut in March. Sometime after grades come out for Winter quarter, I should hear I made the next cut, which brings us to some other stuff like essay writing, and ultimately the lottery that will either put me on hold for a year, or shotput me into nursing school this fall.

I can't wait for the next phase of my life as I learn the skills to be a nurse, and start clinicals to work with patients.

Movin' on!!!
Posted by Jules at 2/19/2010 10:03:00 PM No comments:
Email ThisBlogThis!Share to TwitterShare to FacebookShare to Pinterest

In Case Anyone Wonders: "Does Nora Need a New Stuffed Animal?" 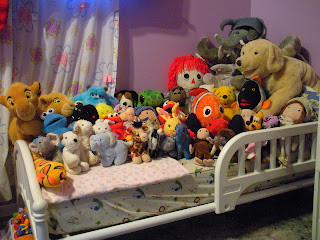 Brian likes to pose them all like they're looking at Nora when she comes home.

We're not sure really who's sicker, but I'll tell you, I've bought maybe FOUR of the beasts in this photo...the rest are gifts.

Amazing how they proliferate on their own, isn't it??
Posted by Jules at 2/11/2010 10:28:00 PM No comments:
Email ThisBlogThis!Share to TwitterShare to FacebookShare to Pinterest 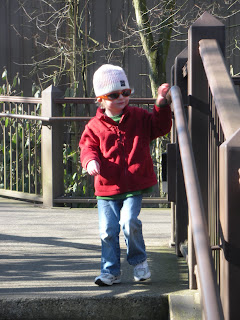 It was nuts at the zoo today.

During the winters, they have $2 Tuesdays on the 2nd Tuesday of the month, so the parking long was all but FULL by the time Nora and I got there at 10:15.

We squeaked into a spot and headed in...

The Train was running (a rarity in the winter),

We had a blast with all the people there, fabulous weather, and warm enough to go without gloves in February.

But my favorite picture of the day was one where Nora looks like a little celebrity kid walking around in her little shades...

Afterwards we took the long way home by driving through Washington Park to the kids playground, and stopping at a downtown grocery store before hitting the road for home.

A great day in Portland!
Posted by Jules at 2/09/2010 10:46:00 PM No comments:
Email ThisBlogThis!Share to TwitterShare to FacebookShare to Pinterest 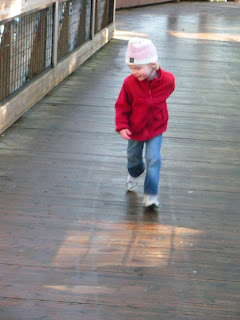 There really isn't a bad age...at least not yet.

Yes, she's almost 2 and a half. A lot of people like to remind me of her age when she's gone "wet noodle" on me and is freaking out because it's bedtime, or whatever else she doesn't want to do.

And today she wow'd me.

Miss Nora loves to paint and color. She's plowed through three sets of water colors, one set of tempura-style Crayola (thank god they're washable) paints, and a full set of crayons and fingerpaints, colored pencils, and several coloring books.

Today, as she peeled me away from the computer studies, saying "PLAY! PAINT! PLAY! PAINT!" 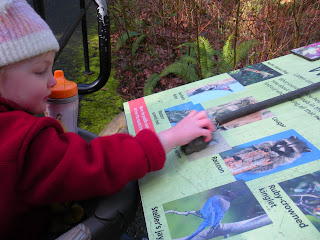 I decided to rebel and play with the crayons.

I started to draw letters just to see how far we could get.

I draw C, and "C" she said (this is about as far as she's gotten before.

How far did she get today without making a single mistake today?

R, as in RIDICULOUSLY AMAZING!

So today as I went through about 15 letters past where I thought she was, I praised the bajeezus out of her and couldn't believe it.

After that, I found an awesome site for learning letters and sounds (reading through Phonics) at Starfall, an educational website...and she watched it with rapt attention (take a look at the alphabet part and you'll see all of Nora's favorite animals being listed...TIGER goes ROAR T, TIGER (Sound T)

She danced around my room while I played each letter, circling around and around the room, in an alphabet tizzy.

Then she collapsed into bed at 8 p.m., exhausted from proving her mettle.

My girl knows an awful lot of her ABCs, and her Mommy couldn't be prouder.

What an Amazing Age.

Really.
Posted by Jules at 2/04/2010 09:49:00 PM No comments:
Email ThisBlogThis!Share to TwitterShare to FacebookShare to Pinterest

Lucky/Cute Picture of The Day 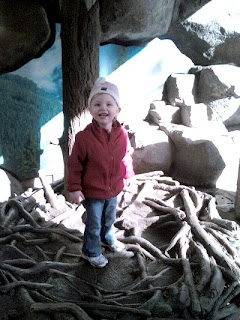 With the warning from Brian that Tuesday would be the sunniest day this week, and with no school today and no hope of studying because my kid is almost 2.5 and won't leave me alone to study...I decided to take her to the zoo.

We went all around...and took a turn we normally don't towards the eagles.

And when we hit the play area with the eagle's nest, she said that too.

And we played there for almost half an hour.

She also noticed when I said that it was a "big bird's nest" that she kept saying "Big Bird's nest" too.

It was a great day...more pictures to follow, but this was my favorite.
Posted by Jules at 2/02/2010 11:55:00 PM No comments:
Email ThisBlogThis!Share to TwitterShare to FacebookShare to Pinterest 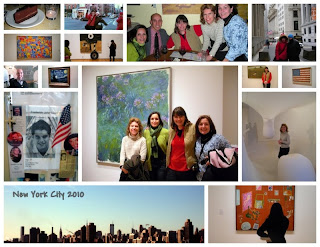 My little brother Joel's birthday is tomorrow, and this past weekend, I got the privilege of flying out to New York and surprising the bajeezus out of him at the restaurant Mojo in Harlem!

It all started last November around Thanksgiving, when we realized Joel wasn't coming out for Christmas due to scheduling problems. I looked on Orbitz and found a good price on a ticket, and asked Brian to make that my Christmas present...

Then I e-mailed Joel's partner Dave and asked if it'd be OK...and that I wanted it to be a SURPRISE!

So last Thursday, I flew from here to Seattle, then Seattle to Newark...I texted Dave and we had a problem that Joel was home from work, so our original plan to dump my bag at their apartment then head to a restaurant was out.

I met Dave at the 72nd street subway stop, then we headed to Mojo, while Joel was kept thinking that Dave and he were meeting Dave's new boss.

Joel, knowing Dave was running late, was wondering WHAT was going on with his normally fastidiously on-time boyfriend.

Dave and I arrived at Mojo just MOMENTS before Joel did. Dave told me to sit a few seats down at the bar. I ordered a drink, and started texting my family to tell them where I was, and how close we were to seeing Joel.

Joel arrived and went to Dave, completely unsuspecting...then a few moments later, Dave said "That gal at the end of the bar sure looks like your sister..."

I looked up and smiled.

He yelled and threw his menu on the bar. He cried a little as we hugged for the longest time.

The bartender later thanked me for telling her what was going on -- because everyone else in the restaurant was wondering WHAT the hell we were doing!

We sat down and had a WONDERFUL dinner. They served a wonderful Bordeaux wine, and I had their skirt steak, which was FABULOUS.

The music, the atmosphere, the service was perfect....and it was the beginning of a wonderful weekend, where Joel and I seemed to wake up each day and pinch ourselves since we couldn't believe I was there!

I saw friends on Friday while Joel and Dave worked -- a great tour of The Museum of Modern Art and a little wine place in SoHo before dinner in the West Village with my girlfriends who were able to get in from Connecticut...

Saturday with Joel and Dave included a trip down to Ground Zero, Wall Street, the courthouse, and the Museum of Metro New York before a fabulous dinner and a show -- "Memphis" -- and a leisurely walk through Times Square and a to-die-for Chocolate Mud dessert on the Upper West Side.

Sunday morning came too soon, but I was glad to get home to our girl.

My bag followed a day later.

But boy, was that a FUN weekend, and one Joel will probably not forget. He told Dave he hoped to see at least one family member for his 40th, and when Dave asked who he thought could/would come, Joel said "Well, Jeff and Jill and Jer are all working or coming another time...Julie's crazy enough to do it, but she IS in school and has a 2-year-old..."

The world is a better place with you in it!
Posted by Jules at 2/02/2010 11:32:00 PM No comments:
Email ThisBlogThis!Share to TwitterShare to FacebookShare to Pinterest
Newer Posts Older Posts Home