"When Two Vowels Go Walking...The First One Does The Talking" 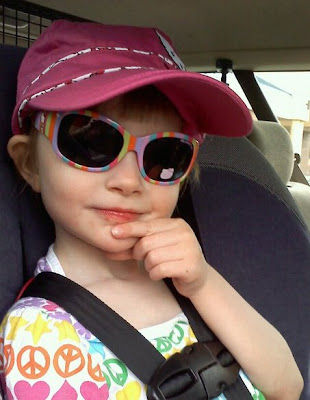 Nora's just about 4 months shy of her 4th birthday now, if you can believe that.

She loves her school, she loves life...and as it turns out, her ABCs.

I've been working with her on Starfall.com, an awesome website that helps teach children to read.

I read somewhere it was originally set up by the parents of a son who has autism, and that it helped him learn how to sound out words when other methods failed.

It's been amazing to watch Miss Nora as she learns her letters and the sounds they make. 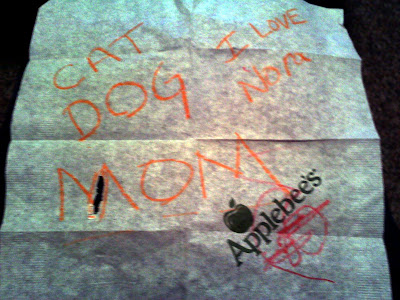 Tonight is Brian and my anniversary and we had a very long day today -- I had an exam this morning (my last one for the term, before the final), and then an afternoon seminar.

We decided to go to Applebees for dinner -- a favorite spot for us as they have great deals on dinner for two, and Nora gets taken care of with a good kiddie menu.

We also spelled out some other words, like CAT and MOM, and she got those right too. A few others as we started to sound them out, she followed.

It is truly amazing to see your little one start to read and sound things out. I tucked the napkin away, and she looked at me like she wasn't sure what I was doing, and I just said "Sorry kid, but that's going into the fossil record."

Someday, we'll cover what fossils are...

My little girl isn't a baby or even a toddler anymore.

We went to the shoe store afterwards and she tried on several pairs of summer sandals and picked one becuase they were "just like Mommy's" and when Brian tried to bring out a navy blue pair, she very clearly said "Those are for boys, Dad."

She chose Hello Kitty accessories and cute sandals, and said "Thank you Daddy" at the end of the night.

Such a sweet pea.
Posted by Jules at 5/20/2011 09:41:00 PM
Email ThisBlogThis!Share to TwitterShare to FacebookShare to Pinterest